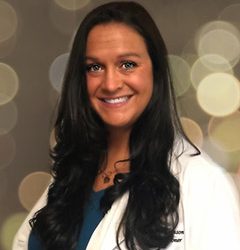 Written by on October 2, 2021. Posted in Physicians

Kimberly was born in Asheboro, NC and currently lives/resides in Charlotte County, VA with her husband and son. Obtained both her Bachelors and Masters via Chamberlain University. Kimberly completed her studies and graduated with her master’s degree as a Family Nurse Practitioner in April 2021. She holds board certification through the American Association of Nurse Practitioners. In addition, she also holds certification as a nurse in the operating room (CNOR); as surgical services is where she spent most of her career. During her tenure as a surgical services nurse, she discovered her passion for orthopedics in both the clinical and perioperative setting.

Written by on November 5, 2021. Posted in Physicians 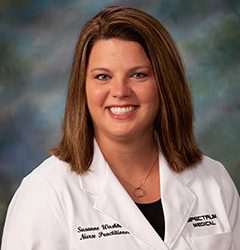 Susanne was born and raised in Martinsville and Henry County. She currently resides in Ridgeway, VA with her husband and two boys. She obtained her Bachelors of Science degree from Ferrum College in 2005. She graduated from Virginia Western Community College in 2007 with her degree in Radiologic Technology. Working full time as an x-ray technologist she continued her education as a Registered Nurse graduating from Patrick Henry Community College in 2013. After almost 7 years of nursing, she pursued her master’s degree as a Family Nurse Practitioner from Walden University where she graduated in May 2021. She is board certified with the American Association of Nurse Practitioners.

Susanne comes to us with over 10 years of experience in the medical field, with the majority of her career in orthopedics. She has a passion for orthopedic patients and enjoys giving back to her community. Outside of work she enjoys supporting her children’s sports, camping, boating, and spending time with her family and friends. She also enjoys being a member of the praise band at Horsepasture Christian Church. 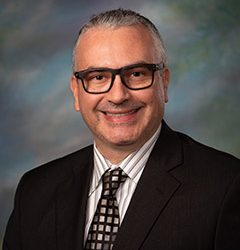 Dr. Ruberte Thiele initially pursued a career as a biomedical engineer in the medical device industry and academia. Interested in directly impacting patients’ quality of life, he applied to medical school with the singular goal of becoming an orthopaedic surgeon. After completing additional training in robotics and navigation for partial and total joint replacement as well as revision arthroplasty, he returns to the area eager to help patients get back to doing what makes them happy. When not attending one of his kid’s swim meets or soccer games, he enjoys outdoor activities like biking and hiking as well as recreational basketball.

Written by on April 2, 2016. Posted in Physicians, Meet Our Investigators

Dr. Voos completed his undergraduate degree in Biomedical Engineering at Marquette University. He graduated from the University of Louisville Medical School and also completed his Orthopaedic residency there in 1998. He then went on to complete a fellowship in spine and scoliosis surgery at the renowned Hospital for Special Surgery/Cornell University in New York, NY. He comes to Spectrum Medical with nearly 20 years of experience in all facets of spinal surgery. Dr. Voos specializes in providing non-surgical and surgical management of cervical, thoracic and lumbar spine conditions, including cervical myelopathy, herniated discs, deformity, stenosis, tumor and trauma.

Dr. Stephan Jannach joined Spectrum in May 2017. Dr. Jannach completed a postdoctoral fellowship as a Senior Research Assistant and then Assistant Scientist for NIEHS (National Institute of Environmental Health Sciences) Marine and Freshwater Biomedical Science Center. Jannach received his Bachelor of Science in Chemistry from Florida National University in the mid ‘90’s. He then continued his Doctorate of Medicine at the University of Miami School of Medicine. Finally, he completed his residency in Anderson, South Carolina at Anmed Family Health Medicine.

This will be the community outreach page.

Dr. Dailey recently joined Spectrum Medical in July 2015. Having been raised in Hillsborough, Dr. Dailey received his Doctorate at the Brody School of Medicine in Greenville, North Carolina. He then went on to attain his residency at Baylor University in Houston, Texas, considered to be one of the of top Physical Medicine and Rehabilitation programs in the country. Dr. Dailey’s hard work both medically and academically allowed him to achieve a fellowship at the renowned pain management department at MD Anderson Cancer Center in Houston, Texas, where he has spent the last four years. With an exceptional reputation for patient care, Dr. Dailey is committed to combining core family values with his experience to provide treatment unique to each individual.

Dr. Mahoney attended medical school at the University of Texas in Houston, Texas. He completed his residency at Columbia-Presbyterian Hospital in New York, New York. He is a third generation orthopedic Surgeon with more that 20 years of experience. He is an active member of the American Academy of Orthopedic Surgeons, Patrick Henry Medical Society and the American Board of Orthopedic Surgery. Dr. Mahoney volunteers at the local community theater and enjoys golf, fishing and gardening.

Dr. Fraifeld is a distinguished, nationally recognized leader in the field of Pain Medicine with over 21 years experience in his field.

While earning his undergraduate degree in biology he worked full time as a researcher at the Texas Medical Center in Houston going on to earn his MD at the University of Texas Medical School at Houston. He did a surgical internship at LSU Medical Center in Shreveport, LA. before going on to do his anesthesiology residency at Vanderbilt University hospital in Nashville, TN. where he focused his training in the field of Pain Medicine.